The Sea Services Leadership Association, the nation’s premier professional development organization for women in the sea services, is pleased to announce the winners of the 2021 Emerging Leader, Compass and North Star awards.

SSLA’s annual awards include members of all services and aim to recognize outstanding individuals at various points in their careers and sectors of service. Award recipients also stand out in their commitment to exceptional leadership in furthering the mission and vision of SSLA within the uniformed services. 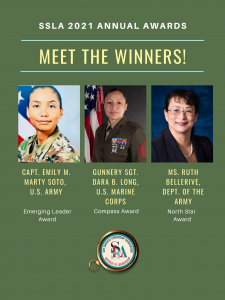 This year’s awardees include:

Emerging Leader Award: Capt. Emily M. Marty Soto, Branch Chief, Functional Management Division, Technology and Business Architecture Integration, Office of the Deputy Chief of Staff, (G-1), Department of the Army. Capt. Marty Soto serves as a volunteer with the Women of Tomorrow Mentor and Scholarship Program to guide, inspire, motivate and empower small groups of at-risk teenage girls in public high schools. She actively works with Lean In Circles, bringing together women from various backgrounds and fields of interest to receive and provide mentorship; she also uses this feedback to advocate for better public policies and a more equitable workplace. A doctoral candidate, Capt. Marty Soto is also using her research to develop a plan of action that will increase the representation of women, specifically women of color, in leadership; and she has collaborated with other graduate students through the Grad Girl Wellness Company to highlight stories of women of color and first-generation students in graduate school.

North Star Award: Ms. Ruth Bellerive, Futures Team Chief of the Operations and Intelligence Integration Division, Operations and Integration Directorate of the Deputy Chief of Staff of Intelligence (G-2), Department of the Army. Ms. Bellerive serves as the Directorate Representative to the G-2 Advisory Council, a platform to support and advance Army-level diversity and inclusion councils and initiatives playing an active role in bringing workplace challenges to the attention of senior G-2 leaders. Ms. Bellerive personally hosted a virtual G-2 diversity session entitled, “Your Voice, Your Story,” sharing her Korean heritage and experiences as veteran, defense contractor and government civilian to foster open discussion on varying viewpoints and address cultural differences, bias and prejudice in the organization. She has also served as a Volunteer Election Official for local and Federal elections for the state of Virginia in Stafford County since 2015 and is an active volunteer at Ebenezer United Methodist Church in Stafford.

“On behalf of the entire SSLA board of directors, I’d like to extend my congratulations to all our annual award winners,” said SSLA President Col. Jenny Storm. “Selection for the awards was extremely competitive this year, with all nominees truly representing our top leaders, volunteers and advocates from across the services. We’re especially pleased so see how these leaders have focused their efforts in mentoring, developing and advocating for military women, which is a critical component of our organization’s mission.”

“Additionally, it’s also key to note that two of this year’s award recipients are from the Army,” continued Storm. “This is significant because while SSLA was founded originally to mentor and serve the professional development of women in the Navy, Marine Corps and Coast Guard, our efforts and membership have expanded significantly to include representation from men and women of all military services, all ranks, and across the Department of Defense.”

More information about SSLA’s annual awards is available at https://sealeader.org/ssla-awards.

Established in 1978, SSLA is a non-profit, non-political organization recognized by the United States sea services, dedicated to providing professional development to growing service women as individuals through access to networking, mentoring, and opportunities to unleash their leadership potential and increase the effectiveness of the organizations in which they serve. SSLA is an officially recognized affinity group for the sea services, and continually advises the services about issues affecting Navy, Marine Corps and Coast Guard personnel and their families. Each year, SSLA hosts the Joint Women’s Leadership Symposium for all the military services, making it the largest gathering of women in uniform nationwide. To learn more about SSLA and the Joint Women’s Leadership Symposium, visit https://www.sealeader.org/, or follow SSLA’s Facebook, Twitter, LinkedIn, and Instagram.