"The Power Within You" 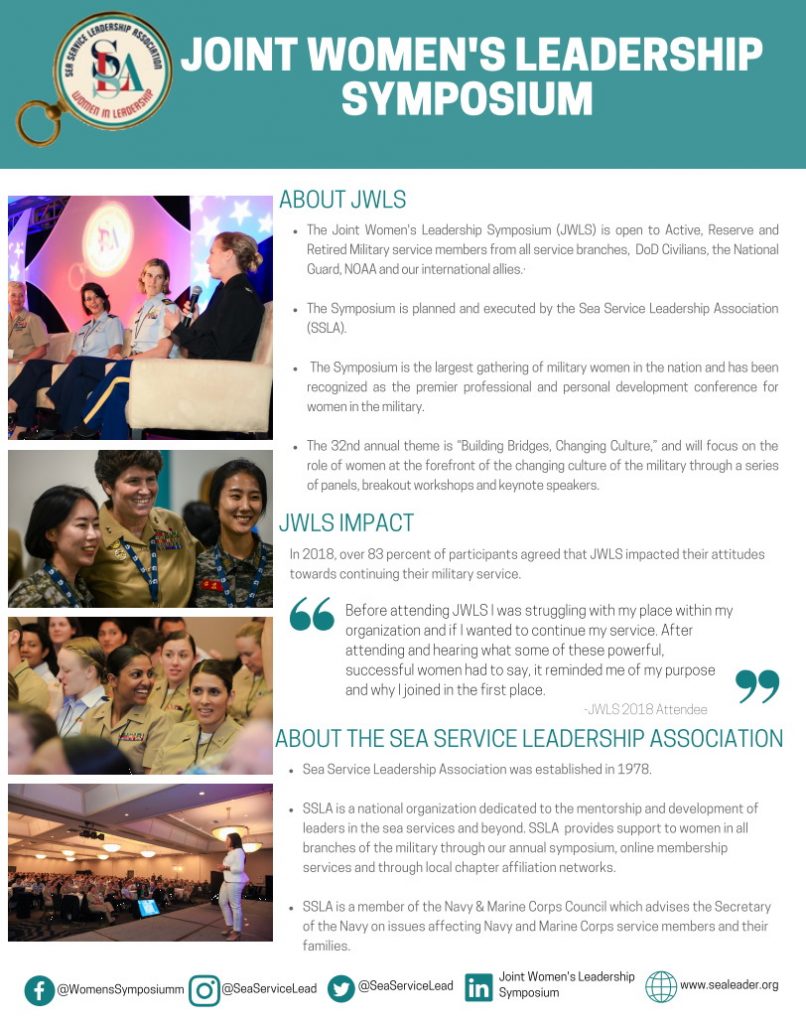 WASHINGTON, DC (July 10, 2019) – The Sea Services Leadership Association (SSLA) will host the 32nd Annual Joint Women’s Leadership Symposium, the largest gathering of U.S. military women in the nation, August 22-23, 2019, in Washington, DC. Returning to the East Coast after being in San Diego last year, servicewomen and men from all Department of Defense branches, the U.S. Coast Guard, NOAA, and civilians, are encouraged to register for the two-day symposium taking place at the Walter E. Washington Convention Center.

This year’s theme, “Building Bridges, Changing Cultures,” will offer professional development and leadership seminars preparing women to excel in the military of today and tomorrow. The first day of the conference will be a joint services day followed by day two featuring service specific sessions to allow discussions of branch specific topics.

“The Joint Women’s Leadership Symposium continues to be the foremost professional development opportunity for women in the military, and we are pleased to be returning to Washington, DC this year for the 32nd annual conference,” said Marine Lt. Gen. Lori Reynolds, SSLA chairperson of the board. “This year promises to be as fulfilling as ever, with a top-notch agenda of successful and thought-provoking speakers to challenge and inspire our participants as in years past. We are looking forward to seeing everyone in our Nations’ Capitol for an exciting personal and professional reunion.”

Featured on the main stage will be the International Women’s Panel with SSLA Chairperson of the Board Marine Lt. Gen. Lori Reynolds; a panel on Military Families and Health including Army Lt. Gens. Laura and James Richardson; and a tentative Keynote address by Secretary of the Navy Richard Spencer. Breakout sessions will cover the topics of Post-Traumatic Stress Disorder, sexual harassment, finance, leadership, and stories from those in the LGBTQ community. The full agenda can be found here.

For the second year, SSLA will host a networking and transitioning seminar at the Walter E. Washington Convention Center on Wednesday, August 21 from 8:00 a.m.-8:00 p.m. for service members preparing to retire and transition to a civilian career. The seminar will present guest speakers with insight from their personal transitions as well as a panel of pro-military civilian employers. Centurion Military Alliance will be on site to provide valuable insight into resume

Registration for JWLS 2019 is available through RegFox, and each service has made available a certain number of free registration spots on a first-come, first-served basis. To learn more about the Joint Women’s Leadership Symposium and SSLA, visit www.sealeader.org, or follow JWLS’ Facebook, SSLA’s Facebook, Twitter, LinkedIn, and Instagram.

The Joint Women’s Leadership Symposium is recognized as the premier professional and personal development conference for women in the military. Past symposia have featured senior leaders from the White House, Department of Defense and the private sector. Attendees have lauded the symposium for its delivery of practical, immediately applicable knowledge and skills, and for the exposure, it has given them to a wide range of high-profile leaders and organizations. This is an event that cannot be missed for women and men of all ranks looking to benefit from networking, mentoring, education, and leadership development training.

Established in 1978, SSLA a non-profit, non-political organization recognized by the United States Sea Services and dedicated to providing professional development through networking, education, and mentorship of women from the United States Navy, Marine Corps, and Coast Guard.

SSLA is a member of the Navy & Marine Corps Council, which advises the Secretary of the Navy on issues affecting Navy and Marine Corps personnel and their families. Each year, SSLA hosts the Joint Women’s Leadership Symposium for all five military services, making it the largest gathering of women in uniform nationwide.