The Sea Services Leadership Association, the nation’s premier professional development organization for women in the sea services, is pleased to announce the winners of the 2021 Rising Star Award.

The award recognizes graduating female midshipman candidates enrolled in a military reserve officer training corps (ROTC) or officer-in-training (OIT) program (Navy, USMC or Coast Guard) who have demonstrated exceptional performance in academics, leadership and community service over the course of their ROTC/OIT program.

This year’s awardees include:

“I’d like to extend our congratulations to each of our Rising Star Award winners,” said SSLA President Lt. Col. Jenny Storm. “Selection for this year’s award was among our most competitive yet – with winners drawn from a group of thirty-three submissions, all from extremely qualified individuals. As an organization that aims to mentor and develop military women, we’re thrilled to see how these women have excelled among their peers in academics, leadership, and community involvement. We’re even more excited for the contributions they’ll be making in a few short months as officers in their respective services and for the men and women they’ll soon lead!”

The Rising Star Award is one of four awards presented annually by SSLA that recognize outstanding men and women from the services and Department of Defense across a wide spectrum of leadership. Other awards include the Emerging Leader Award, presented to one female active duty or reserve junior enlisted member (E3 to E6), one active duty or reserve junior officer (O1 to O4), and/or one government civilian employee (GS-5 to GS-12 or their equivalent), male or female;  the Compass Award, presented to an active duty or reserve enlisted member, in the pay grades of E7 or above, male or female; and the North Star Award, presented to an active duty or reserve officer in the pay grades of O-5 and higher or a government civilian employee in paygrades GS-13 (or equivalent) to Senior Executive Service (SES), male or female. Nomination deadlines for the Emerging Leader, Compass and North Star Awards have been extended to May 15; specific information and eligibility criteria for each award and the process for submitting nominees is available at https://sealeader.org/ssla-awards.

Established in 1978, SSLA is a non-profit, non-political organization recognized by the United States sea services, dedicated to providing professional development to growing service women as individuals through access to networking, mentoring, and opportunities to unleash their leadership potential and increase the effectiveness of the organizations in which they serve. SSLA is an officially recognized affinity group for the sea services, and continually advises the services about issues affecting Navy, Marine Corps and Coast Guard personnel and their families. Each year, SSLA hosts the Joint Women’s Leadership Symposium for all the military services, making it the largest gathering of women in uniform nationwide. To learn more about SSLA and the Joint Women’s Leadership Symposium, visit https://www.sealeader.org/, or follow JWLS’ Facebook, SSLA’s Facebook, Twitter, LinkedIn, and Instagram. 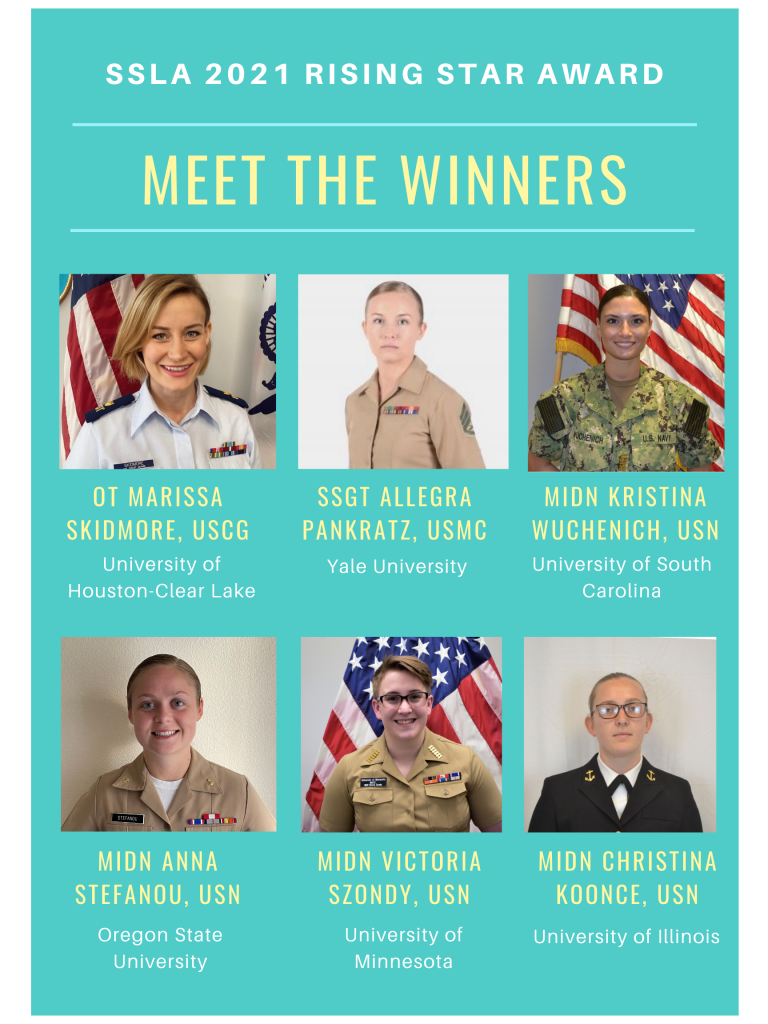