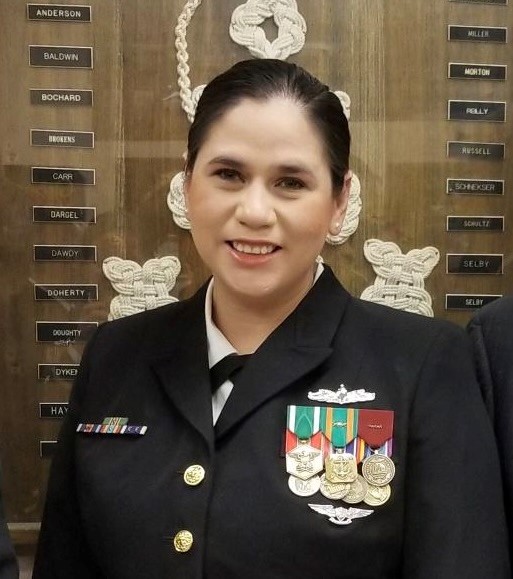 Lt. Cristina Frost, USN, is SSLA’s Vice President for Membership. She is a lifelong member of SSLA and is actively involved with several mentorship and career development groups within her community. She is a SSLA members’ first point of contact and enjoys actively engaging with members.

She enlisted in Navy as a Nuclear Machinist Mate in August, 2005, and is currently serving as Norfolk Naval Shipyard (NNSY) Nuclear Regional Maintenance Department Naval Station Coordinator, where she leads and coordinates more than 190 Sailors and 150 civilians in the accomplishment of all nuclear waterfront work at Naval Station Norfolk. Her enlisted tours include USS Nimitz CVN 68), USS George Washington (CVN 73), NNSY Supervisory Radiological Control Technician, and USS Emory S. Land (AS 39).

She earned her commission as a Nuclear Limited Duty Officer (LDO) based on her technical expertise in the nuclear field and at time of commission was the 10th-ever female Nuclear LDO. Her commissioned career started on the USS Dwight D. Eisenhower (CVN 69) during the demanding global pandemic of COVID-19. Eisenhower’s 2020 deployment set a Naval record for over 200 consecutive days at sea and coined the term “Iron Shellback.”

She is currently working on her Bachelor of Science in Geoscience from Southern New Hampshire University, and enjoys renovating her home with her husband, James.